Getting the Inspiration from Lee Chong Wei! 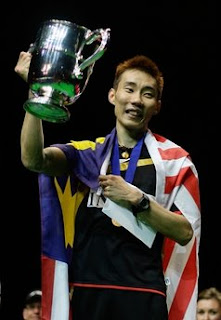 Lee Chong Wei in seventh heaven (Photo: AP/Simon Dawson)
WORLD No. 1 Lee Chong Wei is in seventh heaven after realising his dream of becoming the All-England champion in his seventh attempt in Birmingham on Sunday. He defeated Kenichi Tago of Japan 21-19, 21-19 in a tight final at the National Indoor Arena. It has been a challenging journey but one that the 28-year-old will always remember. He goes on record as the 100th champion of the world’s oldest badminton tournament. He talks to Starsport’s RAJES PAUL and tells how he lived up to the expectations after many past frustrations and what the future holds for him and the Malaysian badminton team.
HOW does it feel to become the champion that you always wanted to be?
It is an indescribable feeling. In my first All-England in 2003, Hafiz (Hashim) won the title while I was a first-round casualty. I had a heart-to-heart talk with coach Misbun (Sidek) and told him how much I wanted to win the All-England. He promised to make it happen for me if I was willing to give full commitment in training.For the last few years, I returned home very disappointed ... always losing to a Chinese. On the eve of the final against Tago, I could not sleep that well. I was restless as I did not want to go back without the title. I still cannot believe that I have won it. It has not really sunk in yet. One thing is for sure, I can sleep well now. I am only the fifth Malaysian to win the All-Eng­land but I am glad that I ended a seven-year wait for it.
WHAT was the driving factor behind your success this time?
I think the key word here is the 100th celebration. I had to win because it is a special edition of a prestigious tournament. People don’t really remember if you are the 2008 or 2009 winner. But it makes a lot of difference when you are the champion of its centenary tournament. I was driven by this. Besides, I have not won any major title and this seemed to be the perfect stage to pull it off. I have always crashed out in the early stages, especially in the world championships.
HOW do you feel about winning the title without having to deal with China’s top stars Lin Dan or Bao Chunlai?
Probably, I will be more satisfied if I had beaten Lin Dan for the title. That is what people want to see. I had a better chance following the exit of Lin Dan (quarter-finals) and Chunlai (semi-finals) and I took that well. But of course, I cannot stop people from having their opinion. Some may discount my achievement because I did not have to play against any of the top Chinese players. That is their view. But I have to admit that it would have been hard against them. They have five good singles players (the others being Chen Jin, Chen Long and Du Pengyu) and it is not easy for one to clear so many hurdles. The Chinese are not in an All-England men’s singles final for the first time since 1999 but I am sure they will bounce back. And I hope to be ready for them.
WHAT is the most priceless lesson that you will take back home from this All-England?
I came into the tournament as an unbeaten player on the international stage since the Super Series Masters Finals (in December). I started the year by winning the South Korean Open and then the Malaysian Open. The pressure was heavy on me. It felt like the Olympic Games. But I managed to cope with it in every match . I am getting better in handling the pressure, which is really good.
IS TAGO ready to challenge strongly and consistently on the big stage?
He has improved tremendously since I last played against him a year ago (in the Swiss Open). He made life difficult for me in this final. I wasn’t safe even when I had a two-point lead over him. He kept coming back at me. Tago is certainly a great fighter and has good skills. The South Korean (Shon Wan-ho) also did well in the quarter-finals. These players do not show nerves and we will have to watch out for them. I hope our younger players would be inspired by them too.
WHO are the people behind your success?
There are so many of them. My coach, Misbun, however, needs special mention. He has been with me since I was a junior. He knew how much I wanted to win this title. He is the most understanding coach a player can have. He is always the first to arrive for training – by 5.30am. He is so dedicated and committed and I am lucky to have him as my mentor. Of course, my parents have been supportive. I also get strong support from the BAM (Badminton Association of Malaysia), National Sports Institute and National Sports Council. And my team-mates who have been selflessly sparring with me. Back-up shuttlers Tan Chun Seang and Chan Kwong Beng gave me quality time in sparring. I will also not forget my adopted father, Wong Wai Choy, who provided the pillar of strength for me when I left Penang for Kuala Lumpur when I was 18. I have to say a big thank you to all Malaysians too. I was also pleasantly surprised to receive a call from the Prime Minister, Datuk Seri Najib (Tun Razak), after my victory. The Prime Minister and his wife had stayed up to watch me play the match live on TV. It meant a lot to me.

HOW do you intend to reward yourself for this achievement?
I will give myself a one-week break to celebrate the win. That will be it. I am skipping the Swiss Open so that I can have some time to relax after giving 100% or more in training and in tournaments for the last three months. It can be mentally draining. But when the one week is up, it’s back to hard work again. There are still other major tournaments for me this year.

WHAT’s next for you?
There will be no tournaments for me until the Thomas Cup Finals (in May). I want to improve on my game and be ready to face all the top ranked players. But the Finals is not an individual event. It’s a team effort and I will do my best to inspire my team-mates. We will be playing at home and hopefully, we can surprise everyone with some good results. I consider the All-England as my first major title after many disappointments. And I hope that this will be a start for better things to come. I want to be a world champion and that means I have to beat some good players from China to achieve it. I will stay focused.
HOW would you sum up the achievements of the other players in the team?
It is unfair to say that the other players were big flops because they lost early. The national players are one big family. Sometimes I win, sometimes Koo Kien Keat-Tan Boon Heong or Chin Eei Hui-Wong Pei Tty win. Most importantly is victories for Malaysia.I have had my bad days too but the others did well to cover up. I hope the players will do well in the Swiss Open and no one will be too hard on them.
WHAT do you have to say to your fans?
I really love them for all the support that they have given me. The final day saw so many Malaysians in the stadium. It was heart-warming and gave me the extra motivation to do well. They have always been encouraging and wishing me well. I went to Chinatown for dinner once with my uncle here and I was swarmed by fans. I just want to thank them all from the bottom of my heart.
Source: The Star, Tuesday March 16, 2010